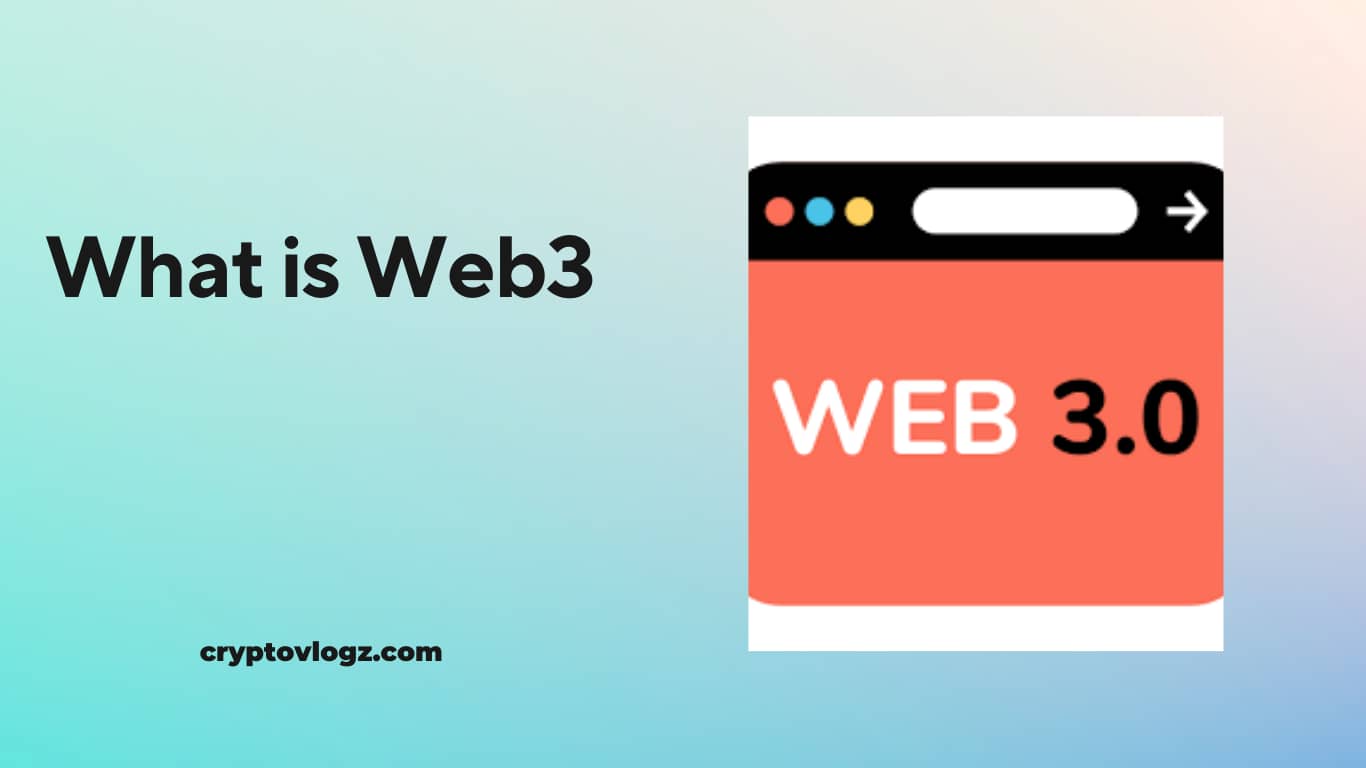 What is web3? This is a question that many people are asking, as this technology is still in its early stages. In simple terms, web3 is the decentralized internet of the future. It uses blockchain technology to create a more secure and efficient online experience for users. Web3 has the potential to revolutionize how we interact with the internet, and it could soon become the standard way of using the web. In this article, we will explore what web3 is, how it works, and why it represents such an important advancement in online technology.

Web3 is the decentralized internet of the future. With web3, there is no centralized authority controlling our online experience. Instead, we are all in control of our own data and interactions. This brings a new level of privacy and security to our online lives.

What does this mean for the average person? It means that we will have more control over our personal data. We will be able to choose how and with whom we share our information. We will also have more control over the applications and services we use online. And because there is no central authority controlling web3, it is much less vulnerable to censorship and other forms of interference.

So if you’re interested in learning more about web3, or if you’re just curious about the future of the internet, be sure to check out our other blog posts on this topic: Why Cryptocurrency is the future of money

Web3’s goals are to create a decentralized web that is more private and secure. It wants to give users more control over their data and interactions. Web3 is also censorship resistant, meaning that no one can interfere with what you do or say online.

How will Web3 change the internet as we know it

The internet as we know it is about to change. web3 is a game-changer that will decentralize the web and make it more secure. With web3, users will be able to control their own data and use applications without having to trust central authorities. This could lead to a more democratic and open internet that is not controlled by a few large companies.

Web3 is still in its early stages, but it has the potential to change the way we use the internet forever. only time will tell how web3 will shape the future of the internet, but one thing is for sure: it is going to be big.

What benefits does Web3 offer over current centralized models

Web3 is a decentralized web platform that offers numerous benefits over current centralized models. Perhaps the most significant advantage of Web3 is that it eliminates the need for third-party intermediaries, such as banks or other financial institutions. This not only reduces costs but also increases security and privacy.

Another key benefit of Web3 is that it provides users with greater control over their data. With centralized platforms, users have to trust that the platform will protect their data and not misuse it. However, on a decentralized platform like Web3, users can choose which applications have access to their data and can revoke that access at any time. This gives users much more control over their personal information.

Finally, decentralization also makes Web3 more resilient to censorship. Because there is no central authority controlling the platform, it is much more difficult for anyone to censor or shut down applications on Web3. This makes it an ideal platform for applications that need to be accessible to as many people as possible, such as news outlets or social media platforms.

Overall, Web3 offers a number of significant advantages over centralized models. These advantages include reduced costs, increased security and privacy, greater control for users, and improved resilience to censorship. As the platform continues to develop, these advantages are likely to become even more pronounced.

What challenges must be overcome for Web3 to succeed

The first challenge faced by Web3 is the scalability of current blockchain technologies. Blockchains are currently limited in the number of transactions they can process per second, which hinders their use for large-scale applications. There are various proposed solutions to this problem, but no clear consensus has emerged yet on which approach is best.

Lastly, there needs to be more adoption of Web3 technologies by both individuals and businesses. Currently, blockchain technologies are still mostly used by early adopters and tech-savvy individuals. For Web3 to truly succeed, it needs to be adopted by a wider range of people and businesses. This will require more widespread education about the benefits of blockchain technology and how it can be applied in various industries.

These are some of the challenges that must be overcome for Web3 to succeed. While they may seem daunting, there is a lot of excitement and progress being made in these areas. With continued development and adoption, Web3 has the potential to revolutionize the way we interact with the internet.

How can individuals and businesses get started with Web3

There is no standard answer to this question, since the best method to get started with Web3 will vary depending on your specific demands and goals. There are, however, a few broad strategies that can assist you in getting started on the right foot:

1. Learn about the basics of blockchain technology and how it works. This will give you a better understanding of what Web3 is and how it can be used.

2. Find a good quality wallet that supports Web3 transactions. This will allow you to store and manage your digital assets in a secure way.

3. Use caution when choosing which dApps (decentralized applications) to use, as not all of them are created equal. Stick to well-known and reputable dApps to avoid any potential scams or security risks.

4. Don’t be afraid to experiment! There are a lot of different ways to use Web3, so explore and find the ones that work best for you.

These are just a few examples of the many different projects and platforms that are making use of Web3 infrastructure. As the space continues to grow and mature, we can expect to see even more innovative applications emerge.

To know about all the Projects/Platforms :

What potential benefits could Web3 bring to society as a whole?

The potential benefits of Web3 are many and varied. In general, Web3 has the potential to bring about a more decentralized, democratic and transparent internet. By virtue of being decentralized, Web3 could make the internet more resistant to censorship and control by centralized authorities. Additionally, the use of blockchain technology could enable new ways of doing things that are not possible with the current internet infrastructure.

A decentralized platform and protocol such as Bitcoin might be used to create completely trustless online services and platforms. This would have significant implications for industries like e-commerce, finance, and healthcare, where trust is currently a major constraint to entry.

Overall, Web3 has the potential to revolutionize how we interact with the internet and may help to create a more open, fair, and inclusive online environment.

How to Build on Web3

The web3 stack is a collection of technologies that together enable the creation of decentralized applications (dApps). Web3 includes a number of different components, each of which plays a critical role in the overall ecosystem.

In this section, we’ll introduce you to the key concepts and technologies that make up web3, and show you how you can start building dApps today.

Web3 is made up of three main components:

The Ethereum blockchain is a decentralized platform that runs smart contracts. These contracts are written in a language called Solidity, which is similar to JavaScript.

The Truffle suite is a set of tools for development, testing, and deployment of smart contracts. It includes a number of useful features, such as:

With the Truffle suite, you can easily develop, test, and deploy your smart contracts on the Ethereum blockchain.

There are many people who believe that AI will play a big part in web3. This is due to the heavy involvement of machine-to-machine communication and decision making needed for running certain applications on this network type, which may or may not come with humans at all times during execution depending upon their programming instructions given by designers/programmers writing them down beforehand.

The metaverse is a term used to describe the virtual world, which is made up of all the user-generated content and experiences that exist online. It’s often thought of as a parallel universe to our own, where people can interact with each other and create new things.

The two concepts are often thought of as being different, but they’re actually quite similar. Both the metaverse and web3 are based on the idea of decentralization and giving users more control. In both cases, users can create their own experiences and content, and interact with each other directly.

So how does the metaverse fit with web3?

Simply put, the metaverse is a perfect example of what can be built on top of web3. It’s a decentralized platform where users can create their own experiences and interact with each other directly.

The metaverse is already being built, and there are many examples of it in existence today. For example, Decentraland is a virtual world where users can buy and sell land, and build whatever they want on it. Similarly, CryptoKitties is a game built on the Ethereum blockchain, where players can breed and trade digital cats.

Both of these examples show how the metaverse can be used to create new experiences and games. But there’s much more potential for the metaverse to be used for other things as well. For example, it could be used for social networking, e-commerce, or even as a parallel universe for research and development.

The possibilities are endless, and the metaverse is just getting started. As web3 continues to grow and develop, we can expect to see more and more examples of the metaverse being used in new and innovative ways.